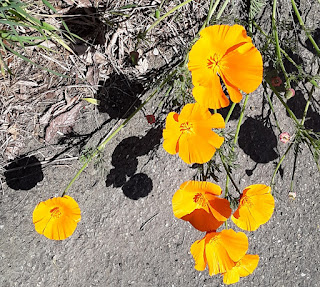 I  have been sheltering in at home since March 17th, maybe 15th. Can't remember now. I've left the house a handful of times to go to the post office,  once to the grocery store and the other times just riding along with my partner while he does his errands.

I've taken the orders seriously only going out for essentials.

Recently,  we got word, our County is going to open some parks, not the beaches. The stickler is, you have to bike or walk in. Well. Most of the parks are quite a ways out, many in affluent communities which means if you can't afford a nice bike, have kids or live in one of the many poor working communities hidden behind the opulent wine country estates, you are out of luck.

So. I am passing on the opportunity to walk or bike in. We have one park that may be open and is accessible near my neighborhood.

One of the reasons,  there is so much overcrowding at our parks and beaches is because people from out of town are ignoring the orders and descending into the small towns and beach communities. So our County is keeping most of them closed to everyone including locals.

The county leaders have pushed tourism for so many years, it's not surprising.  Before the virus, the Sonoma County area was receiving 7 million tourists a year. When I was in Junior High, we were not called the marketing term "wine country ", we were the "Redwood Empire " and there was little to no tourism.

I am sure the money that tourists bring is good for some. For most working people.  It means long hours, a wage that doesn't cover the astronomical living costs unless you sacrifice, live very simply and in a condensed over crowded living situation paycheck to paycheck or go into debt.

I choose to live very simply in a community situation to stay here.

It won't be for long. When orders are lifted we will look forward to traveling. Simply. And working along the way.

Was beautiful in it's own way. I made pasta with little bits of leftovers.  Sauteed leeks and spinach. Tossed with feta, olive oil, green olives and basil.

With window open to the night sky. My partner introduced me to Walter Trout.

I love the blues. Here's some for you. Maybe you will enjoy it too.


on April 30, 2020
Email ThisBlogThis!Share to TwitterShare to FacebookShare to Pinterest