Picnic in the Redwoods 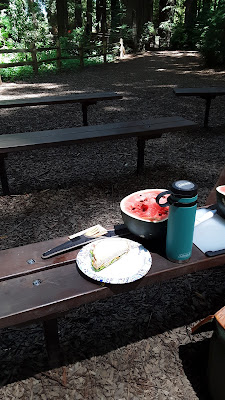 Picnic in Redwoods
After the French Revolution in 1789, the royal parks were opened to the public and picnics became a popular activity for people who were disenfranchised before Bastille Day.  For me, and so many of us picnics represent freedom. Fourth of July, represents our freedom as Americans and the birth of a new nation.
I remember celebrating 4th of July Bicentennial in 1976 in San Francisco in Golden Gate Park. I was eleven years old. Standing on the sidelines, before our family gathering at a picnic in the park, we watched the parade. I still remember Mayor Moscone and his son standing close together, hands on the back of the trunk, pushing their decorated car that had broken down. As they passed us in the parade, they were smiling as everyone shouted encouragement waving them on. Two and a half years later, Mayor Moscone and Harvey Milk were assassinated by Dan White.
During the Pandemic our parks and beaches have been closed for two months.
Finally, the orders have been relaxed somewhat. Curiously, golf courses, wineries and breweries, restaurants with outdoor dining are open while most of our parks picnic areas are still closed.  It seems there is more freedom for economic pursuits, but family gatherings and picnics are discouraged and are blocked off.
Yesterday, my partner and I visited one of our redwood parks and were surprised to find a few picnic tables open, the group picnic areas were still cordoned off. We took a short hike around the park, celebrating our freedom by standing in the cathedral of redwoods, breathing in the trees. Finding a look out point near the lake. We watched the red dragonflies fly low and a school of blue gale fish swim close to the surface near the marshy shore. In the redwoods, after we finished our picnic of cold sandwiches, chips and watermelon, I watched the swallowtail butterflies float in a small patch of sunlight in a garden of ferns.
In my car, we possess a Regional Park Pass and a State Park Pass that allows us entry into dozens of parks near home and through out the State of California. These passes are gold to me. A Willy Wonka ticket to wonder.  I could feel my mood change and my outlook brighten during our visit to the park yesterday. I know how important our freedom is and I don't take it for granted.  It belongs to each and every one of us.
on May 29, 2020
Email ThisBlogThis!Share to TwitterShare to FacebookShare to Pinterest

You can Reach out to Me Here

Your Gift is Appreciated. Thank you!