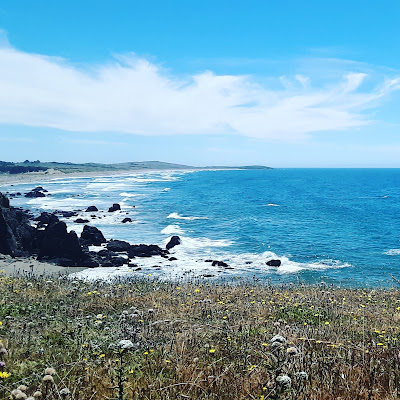 Arched Rock, Bodega Bay
When I worked in the mortgage industry in the early 2000's, my mom's friends had a litter of golden retriever puppies and offered me one. I accepted without hesitation. At the time, I was living by myself in a Victorian studio apartment in downtown Santa Rosa with my cat Buff.
When the golden bundle of fluff was handed over to me at 8 weeks old, I promised her, my new puppy Melanie that I would honor her breeding and make sure that she learned how to swim as soon as possible. She was a golden. She was born for the water. I also promised her that I would take her to the beach and the river several times a week, and I kept my promise.
Within a few weeks, I started taking her to the Russian River, she was baptized fairly quickly in the green currents by a group of river rat kids we encountered on a short romp near a touristy canoe outpost. After, that surprise dunking, she was fully fledged.
Almost every morning, before work, I would take her to Bodega Bay or Monte Rio to swim in the river. I would get up at 4:30 am, get dressed, get Mel and start up my jeep. In Guerneville, I found a local brew house to pick up a coffee and muffin on our way out to the water. At the beach, Mel would swim, I would find a rock to sit on to sip my coffee and contemplate the day.
Back at the office, I remember one of my wholesale reps finding out I had gone out to the coast, a 45 minute drive from my home before work. She looked at me surprised, wondering how did I do it. What did my boss think about me heading off to the coast in the morning. I told her it's not any of my work's business, I get to work on time. It's my morning. My dog's morning.
Mel is gone now. She left me a few years back. She only lived to eleven, dying from cancer. I have no regrets, she lived a good life.
Today, I don't have a dog to take to the beach. It doesn't stop me from going to the coast. It didn't stop me when I was single and now with a partner, we head out to the beach at least twice a week, when it's hot, we go almost everyday. During the pandemic the beaches were closed. When the beaches opened, we were there the first day. I watched as cars pulled up to the sand, opened their doors, and piles of dogs spilled out. All colors, shapes, and sizes of dogs. Happy dogs! So happy to go to the beach.
Yesterday, heading to Bodega Bay from the sheep country, I looked out at the blue horizon and a saw puffs of white spray. Whales!  We found a look out point where the whales feed. We set out our camp chairs in the parking lot in front of the car. I grabbed my binoculars. We met a couple visiting from Placerville to escape the heat. We took turns pointing out the whales breaching, shouting out 12:00, 2:00 when we located one surfacing.
For an hour or so, I sat in my camp chair breathing in the salt air, searching for humpback whales watching the seagulls play in the sky along the cliffs. Water birds skimmed the surface of the shimmering ocean and people got out of their cars taking deep breaths.
We ate our picnic for lunch and dinner, after several hours, we headed back home before dark.
on June 11, 2020
Email ThisBlogThis!Share to TwitterShare to FacebookShare to Pinterest
Labels: Beaches, Dogs